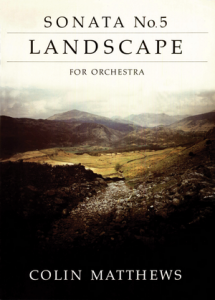 If it’s possible to describe the piece by an analogy, the music might be compared to a journey through a landscape that one sees from many different angles, sometimes in detail, sometime blurred, in daylight and at night.  It is not really a direct journey, nor even a single one, since there are three starts, and several false arrivals.  Perhaps the best way to think of it is as having something of the irrational logic of a dream.

The music begins with a deep rustling of harps, followed by a battery of drums.  Then from profound darkness the music slowly winds itself up in a series of ascending curves, gradually accelerating, until with the entry of the keyed percussion it reaches its first point of release.  The acceleration continues through a number of much shorter episodes until at the point of maximum velocity, with scurrying trumpets and frenetic percussion, it goes over the top and darkness returns.

This marks the beginning of the second ‘journey’.  But before much progress has been made, two new perspectives interrupt the gloom – first fluttering woodwind, then a chorale-like passage from brass.  The subsequent upward movement, at first halting, becomes more flowing and lyrical, and its ‘release’ comes much sooner – the first real tutti in the work, with keyed percussion again prominent.  But it is a false release, because the music changes course violently and accelerates back into darkness.

The third section begins much as the whole piece began; but instead of a gradual progression there is a sudden change of pace; and the music remains very fast until the end.  All the material of the previous two sections is recapitulation, but rather as if shaken up in a kaleidoscope, so that it is not always recognisable. After a whirling coda the music literally disappears into the air.