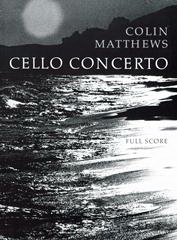 I have long wanted to write a concerto for cello – it is so much my favourite solo instrument – and several years ago I started planning a Double Concerto for two cellos.  But in the end I settled for one.

I have attempted to make the soloist’s role a less dominant one than is customary in a concerto.  That is not to say that it is any less important: but soloist and orchestra are conceived as equal partners in advancing the musical argument, so that the cello sometimes assumes the part of commentator rather than protagonist.