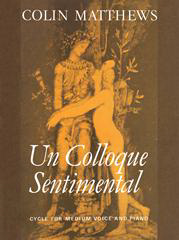 It may seem presumptuous, in view of the incomparable tradition of French Song represented by Debussy, Fauré and many others, even to attempt to set such well known poems; but it does seem, at least, possible to find a twentieth century musical language which can match the imagery of a poetic style which has no real parallel in English verse. And in fact some of these songs were never originally intended for performance or publication, but were written at various times for the private pleasure of setting French words. Later it seemed possible, by framing them within Verlaine’s Colloque Sentimental, to create a valid cycle, where the spectral dialogue of Verlaine’s poem is opened out in three different ways. In Baudelaire’s Le jet d’eau, the lovers are relatively at peace in the relaxation of sensual fulfilment; in the same poet’s Que diras-tu, mon coeur¸ the lover is invoked and idealized as poetic muse; in Gerard de Niervals’ Une Allée du Luxembourg, the poet feels that love has passed him by forever. The Verliane poem first introduces the cycle, and then concludes it, throwing a rather ambivalent light on what has gone before.