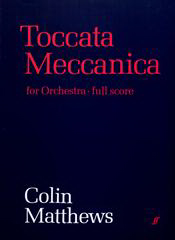 I wrote this piece to a commission from the National Federation of Music Societies in the Autumn of 1984 within the space of a week, after several months of frustrated efforts to get it started.  I have never written a work so quickly before, and I hope that some of the explosiveness of the composition is conveyed in the music.  Its character is deliberately machine-like, with a constant pulse throughout.  There is no change of tempo, and relatively slower melodic ideas are never given the chance to develop for more than a few bars at a time.

The first half of the piece is fairly relentless until the central section, when the ‘machine’ pauses, as if marking time in order to wind itself up again.  Then it comes violently back to life with forceful rhythms from the full orchestra.  After the ensuing climax there is a remote echo of the opening music, over which sustained chords are superimposed; but the work ends exactly as it began, as if the machine were ready to start up again.

In 1993 I reworked Toccata Meccanica for wind band.