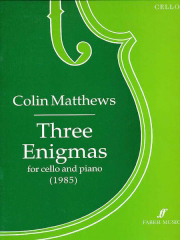 To explain the title would, obviously, take away the enigma: but there is nothing particularly mysterious intended, only an indication of the rather introverted, hermetic nature of the music (and the musical processes employed).  The work is, however, simple to describe – the outer movements are both basically fast and hectic, though with moments of repose, and a feature of both is that cello and piano have extended passages in unison.  The central piece is perhaps the most clearly ‘enigmatic’: a virtually solo mediation for the cello with only the most simple of piano accompaniments.

The Three Enigmas were commissioned by Alexander Baillie with funds made available by the Arts Council of Great Britain, and first performed by him, with Piers Lane, at the Stamford Center for the Arts, New York, in December 1985.

The first and third of these studies were rearranged for clarinet and piano in 1989 (see Three Studies).