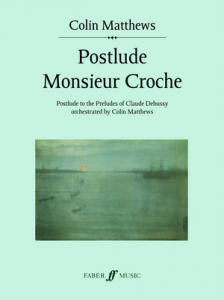 This afterword to the Preludes is part portrait of Debussy – in the essays on music which he wrote in the 1900s ‘Monsieur Croche’ represents Debussy’s alter ego – part an expression of exuberance and reflection at having completed the project. Although I always intended to write a postlude, I waited until I had finished the orchestration of all 24 before starting it : and at that point the only logical thing to do seemed to be to write a piano piece of my own and then transcribe it. It comes much closer to Debussy’s own style than I had either intended or expected – although the harmony goes a little beyond Debussy – and, appropriately, is much the same length (just over 3 minutes) as many of the Preludes. It was written as a gift for and a thank you to Mark Elder and the Hallé, and is respectfully dedicated ‘à la mémoire d’un musicien français’.

The solo piano version hasn’t yet had an official performance (I write this in 2016) – I gave it to Marion Thorpe as an 80th birthday present.