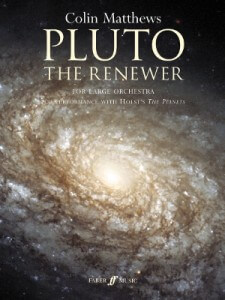 When Kent Nagano asked me to add Pluto to ‘The Planets’ I had mixed feelings. Yet the challenge of trying to write a new movement for The Planets without attempting to impersonate Holst eventually proved irresistible. It quickly became clear that it would be pointless to write a movement that was even more remote than Neptune unless the whole orchestra were to join the chorus off-stage. Nor did I feel that I should rely on the astrological significance of Pluto, which is more than a little ambiguous.

The only possible way to carry on from where Neptune leaves off is not to make a break at all, and so Pluto begins before Neptune has quite faded. And it is very fast – faster even than Mercury: solar winds were my starting point. The movement soon took on an identity of its own, following a path which I seemed to be simply allowing to proceed as it would: in the process I came perhaps closer to Holst than I had expected, although at no point did I think to write pastiche. At the end the music disappears, almost as if Neptune had been quietly continuing in the background.

Pluto is dedicated to the memory of Holst’s daughter Imogen, with whom I worked for many years until her death in 1984, and who I suspect would have been both amused and dismayed by this venture.