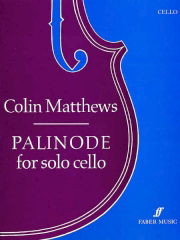 A Palinode is, in poetry, a recantation, or more simply, second thoughts.  The term applies twice over to this work, since in the first place it reflects the fact that, having set out to write a series of short studies for solo cello, I became distracted by a study in slow tempo, and this became – contrary to my original intention – the basis of the whole piece.  But it also relates to the contrast between this work and my orchestral piece Broken Symmetry, completed a week or so before I began work on Palinode, and whose 200 pages of hectic activity last only just over twice the length of the four pages of this score.  Palinode consists in effect, of a sequence of variations on the opening melody, rising gradually to a climax which quite quickly dies away.

Palinode was arranged for nine cellos in 1999.