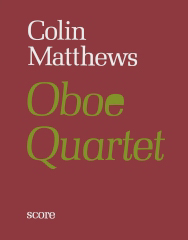 My Oboe Quartet was written early in 1981 to a centenary year commission from the University of Nottingham.  The work, which lasts about 10 minutes, is in fifteen short sections (all linked by related tempi) in which all four instruments alternate with the four different combinations that can make up a trio.  This framework is separate from the musical argument, in which variations on the three ideas set out in the opening section evolve continuously.  The music attempts to be both capricious and lyrical, though not necessarily both at the same time.