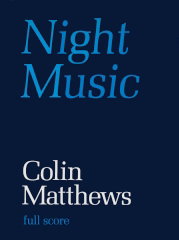 Night Music is a single slow movement, sombre in colour, and the colours are predominantly dark.  The title reflects this, rather than any specific association with night-time: but perhaps there is something programmatic about the two short sections framing the turbulent centre of the work.  Both are high-pitched, the one full of nocturnal rustlings, the other bright like a dawn chorus.  However this wasn’t deliberate, and only occurred to me some time after the work was composed.   The simplest ways to describe the music is as being in five sections, an arch-shape, with the outer sections balancing each other. The tentative lyricism of the opening is more fully developed at the end, where the tensions of the music are to some extent resolved. But it’s not a perfect arch-shape, since the ending is deliberately inconclusive.

I wrote Night Music to a commission from the Apollo Chamber Orchestra, who gave the first performance under Andrew Massey in London in May 1977.  It is dedicated to the memory of Deryck Cooke, whose death while I was composing the work no doubt influenced its somewhat elegiac mood.

The score was renotated in 1997, but the music remains essentially the same.