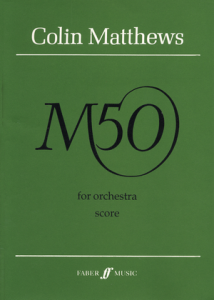 Although M50 moves with some speed, it’s not a piece about motorways (I have also written a work called ‘Contraflow‘, but that’s not about motorways either). Originally composed for only 8 players for the 50th birthday of my brother David in 1993 (L, bent…), I made an orchestral version of the work for Michael Tilson Thomas’s 50th birthday. In this form it was first performed by the London Symphony Orchestra and Daniele Gatti, in March 1995. M50 is intended as a miniature concert overture, lasting just four minutes. It both begins and ends a little hectically (the tempo marking is ‘Frenetico’) but the main part of the piece is a rather relentless progression towards a climax in which a few favourite composers are very briefly quoted (there are other quotations dotted throughout the piece, but it needs quite a bit of detective work to spot them).