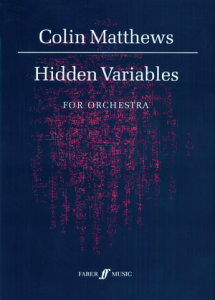 Taking as its starting point the woodblock from Andriessen’s De snelheid, Matthews pits a parade of identifiable Minimalist styles against more chromatic and congested material. The pastiche is hilariously accurate  (mid 80s Glass, Reich and Adams) but the intention appears not to be ironic or mocking. Nor is it possible to identify the chromatic music as Matthews’s ‘voice’. The care and warmth attended upon the borrowed material suggests a more subtle picture : here is a composer aware of the complexity of his creative make-up, as preoccupied by diversity of influence as singularity of voice.
Musical Times (Robert Adlington)

In my 1988 programme note I described the theory of ‘hidden variables’ – a theory largely rejected in the world of particle physics – as (to simplify it radically) ‘an attempt to remove from quantum mechanics its inherent, and – to the layman – disturbing, uncertainty’. I recognised that to try to mirror this in music would be not only pretentious but impossible,  and wrote that ‘various styles, some more fashionable than others (including my own) collide and give rise to unexpected juxtapositions, and the title implies little more than that there is something going on beneath the surface’. The easiest way into the piece is to think of it as a 13-minute Scherzo which consists of a set of interlocking variations, with an unvarying time signature (6/4) and the same very fast tempo throughout.

I didn’t reveal at the time  that the ‘fashionable’ styles included minimalism – although that is fairly self-evident. This reflected my ambivalence about this musical language, with sometimes a friendly nod in its direction, at other times a more aggressive stance. Revisiting the work more than 25 years later it doesn’t seem to stand or fall by whether or not the different styles of music are recognisable – my intention was to write a piece whose abrupt and frequent changes of direction might prove appealing, but that would at the same time have a musical logic that made sense, irrespective of  any variables hidden within.

Hidden Variables was originally commissioned in 1988 for an ensemble of 15 players by the Birmingham Contemporary Music Group. The orchestral version was commissioned jointly by the LSO and the New World Symphony Orchestra in 1991. The first performance was given by the LSO under Michael Tilson Thomas in Gstaad, Switzerland, and recorded by them in 1996.

In 1999 Ashley Page choreographed Hidden Variables for the Royal Ballet, incorporating Unfolded Order as its second half.