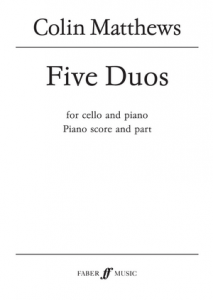 ‘Duo’ implies an equality of partnership, and in the fast second and fourth of these pieces the piano is no less important than the cello – in the fourth both are for much of the time playing in unison.  The slower and more meditative first and third pieces allow the cello to take most of the melodic lead, while in the fifth (which follows the fourth without a break) both players are, so to speak, ‘stuck in the groove’ of their particular and independent music: this leads to a violent climax, and a shadowy coda.