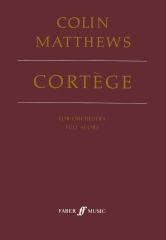 Cortège is a slow piece, clothed in sombre orchestral colours and conceived entirely in one time signature: 3/2. The shape of the work is tripartite.  The first section opens with three timpani notes which will permeate the music. Then, acting as a sort of cantus firmus underneath the strings, the trombones have a sequence of long notes from which the rest of Cortège is derived. At the same time a sequence of triads are set up – the D minor, B minor, A flat minor, and so on – which are used not in a harmonic sense or to establish tonality, but as a series of pivots.

A central section gradually draws together many of the threads of the music, and moves towards a climax in which the massive triad chords, which have previously been in the background, themselves become the foreground.  After that comes a coda, a rather hopeless echo of what has gone before, which finally settles on to a muted D minor chord.