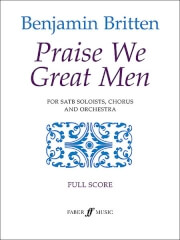 Britten’s setting of Edith Sitwell’s poem ‘Praise We Great Men’, was left unfinished at his death. It was being written for Mstislav Rostropovich to include in his first season with the National Symphony Orchestra of Washington D.C, in 1977. The manuscript breaks of after 118 bars, near the end of the fifth of an intended ten sections.

I didn’t ‘complete’ it, as there was nearly half still to be written when Britten died, and I felt it should stop exactly where he had left it. (Except that, after an empty bar, I added an instrumental coda, based on the penultimate section.) We’d already agreed that I would orchestrate it, and I completed the score a month or two after Britten’s death. It was nearly another ten years before Rostropovich gave the first performance at Snape Maltings in 1985 with the Philharmonia Chorus & Orchestra.