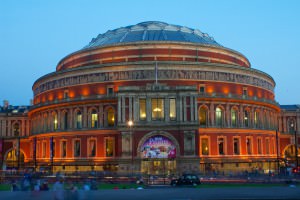 In December 2001 Helen Wallace, editor of BBC Music Magazine, asked me if I would like to be involved in a scheme to celebrate the magazine’s 10th anniversary. She wanted to ask a group of composers to write a collaborative piece of music to be featured on the magazine’s cover CD. Little did we realise that the piece would end up being performed at the last night of the proms nine months later!

Together, we looked at several possibilities for a theme. Her suggestion of Purcell’s aria: ‘Ode on St Cecila’s Day’ seemed ideal: tuneful, but slightly quirky. We decided the overall work would be called ‘Bright Cecilia’. Helen succeeded in charming a group of composers into accepting: from the USA, Michael Torke; from Denmark, Poul Ruders; from Finland, Magnus Lindberg; and from the UK, Judith Weir, David Sawer, Anthony Payne and myself.

For my own variation, I was to ‘realize’ Purcell’s theme (which in the original is just a tune and bass line) and write Variation 1, and I decided that what was needed was not so much a variation as an elaboration – a reworking of the theme to bring it gradually into the present. That way, I thought, the contrast between the theme and its variations would not seem so abrupt.

A conversation with Nicholas Kenyon revealed that he knew all about the project, and was thinking of putting it into the Proms. Since the Variations wouldn’t be ready before September, the best available slot just happened to be the Last Night. A few months later, and the first performance took place at the Royal Albert Hall on 14 September 2002, by the BBC Symphony Orchestra under Leonard Slatkin.

Read an article I wrote about this for the Guardian.