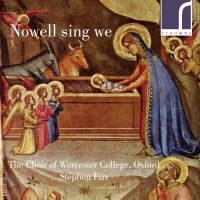 An album of contemporary christmas carols sung by the Choir of Worcester College, Oxford – under the direction of Stephen Farr. The disc contains works from a wide variety of composers including Angel’s Carol by Colin Matthews. The disc also includes the seven O Antiphon Preludes for solo organ by Nico Muhly, performed here by Stephen Farr on the organ of Keble College, Oxford.