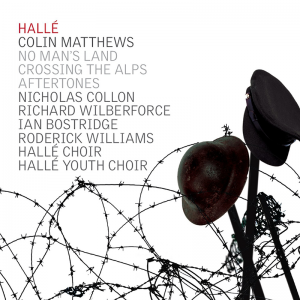 Buy from The Hallé

Hallé marks the centenary of the First World War with a recording of award winning work by Composer Emeritus Colin Matthews. The main work on the recording, No Man’s Land, follows on from Matthews’ very positive collaboration with Christopher Reid on Alphabicycle Order, written for Hallé in 2007, and stages a dialogue between the ghosts of two dead soldiers whose corpses are strung up on the barbed wire of no man’s land.

Reviews of No Man’s Land, Crossing the Alps, Aftertones

[Matthews] conveys the poetry’s underlying menace, overlaying the chorus’s music with diaphanous string harmonies like acrid vapour…[Crossing the Alps] seems to blend Holst’s mysticism with Kodaly’s more exotic and wonder-struck harmonic style. Yet most affecting of all is No Man’s Land.

The Hallé’s association with Colin Matthews continues. Aftertones (2000) was a commission from the Huddersfield Choral Society, these Three Landscapes of Edmund Blunden seeking to underline the poet’s mingled evocations of war and peace ranging from the anguish of Estrangement, via the sombre equivocation of Aftermath then affecting interlude for strings and harp, to the relative consolation in Death of Childhood Beliefs. (…) Christopher Reid’s text [for No Man’s Land] takes in elements of dialogue as well as arias that incorporate songs and marches from the First World War, while extracts from recordings made a century ago add a discreet veneer of authenticity to proceedings. Ian Bostridge and Roderick Williams are sensitive exponents of this unlikely yet thought provoking piece, while Nicholas Collon secures a committed response in both of the large scale works. The composer’s own notes succinctly and informatively fill out the context.

This is, in effect, a double musical commemoration of the events of 100 years ago. Two extended vocal works, admittedly very different in character, one setting for chorus words by a war poet, and the other setting for two soloists a specially devised text by a poet of today, frame a much shorter choral setting of Wordsworth. (Even this last has a faint pacifist, or at any rate pacific, tinge.) The composer of all three works, Colin Matthews, points out that his concern with all aspects of the First World War goes back many years, not least since his maternal grandfather died on the Somme. Furthermore, his long association with Benjamin Britten, and the Britten estate, is bound to bring with it echoes of the War Requiem and other pieces. (…) Overall this is a most rewarding issue, well worth hearing for Matthew s imaginative response to his chosen texts, and for the impressive responsive brought to them by the several Hallé forces in action here.