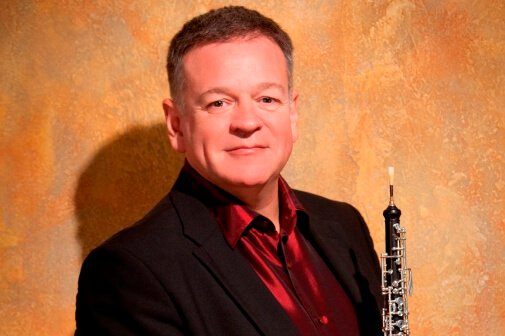 My new work Postludes will be premiered at the Britten Sinfonia concert at the Wigmore Hall on February 6, with Nicholas Daniel (pictured) on the oboe. Postludes is an oboe octet – not for eight oboes (!) but for a combined oboe quartet and string quarter. It’s dedicated to the memory of Olly Knussen.

Here’s my programme note for the concert:

I would normally be shy of confessing to having come across a major piece of music through a film, but I cannot easily disassociate Mozart’s Adagio and Fugue from Agnès Varda’s remarkable film of 1965, Le Bonheur. The use throughout the film of Mozart’s Clarinet Quintet (arranged for wind), matching the bright colours and superficial ‘happiness’ of the story, which is turned on its head by the Fugue played (by string quartet) in its entirety over the final sequence, still seems to me to be one of the rare instances of great music being used impeccably as a film score. At any rate this was my introduction, at the age of 19, to this exceptional and profound work, entered in Mozart’s catalogue of his music in 1788 as “a short Adagio for two violins, viola and bass, for a fugue which I wrote some time ago for two pianos”.

Scriabin was a discovery for me at about the same time – I listened to The Poem of Ecstasy obsessively in the mid ’60s before becoming immersed in the late piano sonatas. I also had a soft spot for Rêverie, Scriabin’s earliest purely orchestral piece, composed in 1898 shortly after his Piano Concerto. Like that and other early works it shows the clear influence of Chopin, but already has an individuality that was to become increasingly marked in the music that followed. This arrangement for nine strings was made especially for tonight’s concert.

In April 1935 Britten composed two pieces for oboe and piano which he called Insect Pieces. He wrote them for the oboist Sylvia Spencer, and in a letter to her he wrote that ‘out of a simple piece … is growing a large and elaborate suite for oboe and strings’. Although two small fragments of other pieces exist, there is no indication that Britten went on to compose the envisaged suite. Instead he wrote a Temporal Suite (the title was subsequently changed to ‘Variations’) for the duo of Natalie Caine and Adolph Hallis, which they performed in the Wigmore Hall in December 1936.  Unaccountably Britten withdrew the work – perhaps wanting to revise it : he had only completed the score 3 days before the first performance, with the last two movements still in sketch form – and it was not heard again until 1980, since when it has become an indispensable part of the oboe repertoire.

Nicholas Daniel, regretting the absence of the ‘large and elaborate suite’, suggested to me in 1994 that the Temporal Variations might well take the place of that missing piece, and indeed it translated comfortably into the new medium of oboe and strings – perhaps not surprisingly, with the masterly Variations on a Theme of Frank Bridge for string orchestra just over the horizon.

The meaning of the work’s title, with its secular overtones, is not clear, although there must be a clue in the variation Britten called Commination, which is defined in the liturgy as a ‘recital of Divine threatenings against sinners’. But the mood of these Variations is by no means all serious, with a typically tongue-in-cheek Waltz and Polka, and considerable demands on the soloist’s stamina in the Exercises.

When I was commissioned by the Wigmore Hall and the Radcliffe Trust to write a work for the Britten Sinfonia I decided to go beyond the two oboe quartets I had written previously by composing an oboe octet – not, as some to whom I mentioned it supposed, for eight oboes (!), but for oboe quartet (oboe and string trio) and string quartet. They are used almost throughout as two separately defined groups, with their own music (which is however often exchanged between the two), only rarely joining together in the same music as an octet. The four movements, of which the first is by some way the longest, play without a break; the second movement is for oboe quartet alone. But this formal organisation is only the background of the piece, whose melodic writing for oboe is the dominant feature. Postludes is dedicated ‘in loving memory’ to Oliver Knussen, who died while I was in the middle of the composition. My earlier quartets had been strongly influenced by his oboe quartet Cantata, the work that he was writing when I first met him in 1976.

The extraordinary ‘Indian summer’ of Richard Strauss’s late years saw the creation of works whose richness of harmony and expression hark back to the works of his early maturity, but with the added depth that came with old age. The acknowledged masterpiece from this time is the Four Last Songs, composed in 1948, a year before he died at the age of 85. But few would deny that the supreme beauty of that work is almost matched, if not at times surpassed, by the remarkable melodic outpouring of Metamorphosen, an unbroken strand of lyricism which spans 25 minutes. He initially sketched Metamorphosen (which means ‘Transformations’)  as a string septet before elaborating it for 23 solo strings, an ensemble which allowed him to expand the work with seemingly effortless counterpoint. In 1996 the septet version was edited by Rudolf Leopold, and proved, surprisingly, to be almost as powerful as the definitive version.

Composed mostly in the spring of 1945, Metamorphosen has been generally interpreted as a lament for the destruction of German culture during the war, concluding with a quotation of the funeral march from Beethoven’s Eroica Symphony and the words “In Memoriam!”. Although the second phrase of this theme is prefigured at the beginning of the work, Strauss claimed that he was unaware of the link until he reached the end of the piece.

Strauss has frequently been accused of sympathy for Hitler and the Nazi party – the ‘In Memoriam’ quote has even been suggested as being in memory of Hitler (who was in fact still alive when the work was completed). But his collaborative role under the early years of the regime was an expedient one – he had a Jewish daughter-in-law and Jewish grandchildren, whom he fiercely protected. Although he quickly fell out of favour, he refrained from public condemnation of the Nazis, but his music spoke against them and privately he despised them. In his diary entry a few days after completing Metamorphosen he wrote “The most terrible period of human history is at an end, the twelve year reign of bestiality, ignorance and anti-culture under the greatest criminals, during which Germany’s 2000 years of cultural evolution met its doom”.