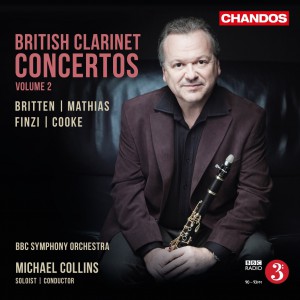 Clarinettist Michael Collins has recently released a second volume of British Clarinet Concertos on Chandos, including a recording of Britten’s Movements for a Clarinet Concerto, orchestrated by Colin Matthews.

The disc was reviewed by Andrew Clements in the Guardian:

“…Britten’s Movements for a Clarinet Concerto is another piece of skilful editing and orchestration: three movements lasting almost 20 minutes, assembled by Colin Matthews from sketches Britten made for jazz musician and bandleader Benny Goodman in 1941, together with adaptations of two other scores from the same period. It makes for a totally plausible, sometimes Stravinskyan work…”

Michael Collins has previously recorded Movements for a Clarinet Concerto for a 2009 NMC disc Unknown Britten.