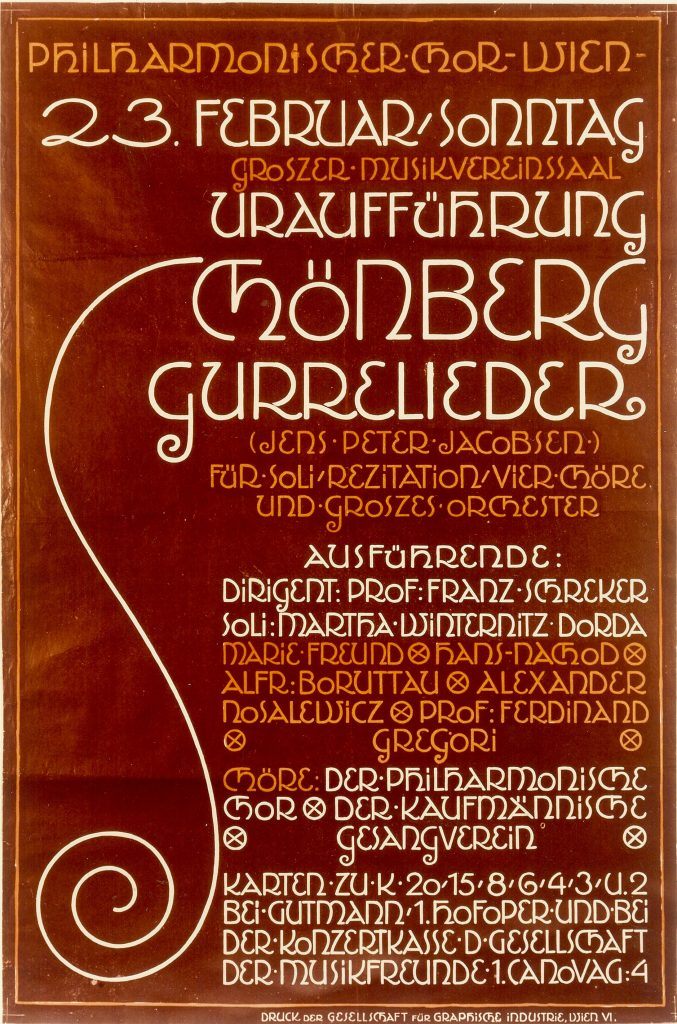 I’m not finding it easy to listen to music at the moment, or more accurately, not finding the right music to listen to. For something comforting I’ve returned to a piece I feel I’ve known for most of my life. I first heard Schoenberg’s Gurrelieder in a performance by the remarkably ambitious Kensington Symphony Orchestra in 1962, conducted by Leslie Head (the orchestra is still going strong). At the time it was billed as the first UK performance of the work with the full orchestra that the score requires (in view of the huge forces needed there was a reduction made by Erwin Stein), and I had always believed this to be the case. However earlier this year Alistair Hinton sent me a review by Sorabji of the performance conducted by Schoenberg in the Queen’s Hall in 1928, which was clearly of the full version. Yet in a letter to Edward Clark in 1927, setting out his ideal rehearsal schedule, Schoenberg wrote that ‘the orchestra (150 players) is rather too large; between 130-135 is sufficient for me’; so it appears that it might have been performed with a slightly reduced orchestra. The 1962 performance was in any case a remarkable undertaking, and I was completely overwhelmed by the music, as I have continued to be ever since.

Gurrelieder was an extraordinary achievement for a composer who had hardly written any orchestral music before, and whose only previous large-scale work was Verklärte Nacht. Schoenberg began writing it early in 1900 as a song cycle with piano, intending to enter it for a competition whose deadline he missed. He added interludes between the songs he had written, and then gradually expanded the piece to its 100-minute length. The subsequent process of orchestration was frequently interrupted, and by 1903 he abandoned the score when he had come to a point about a third of the way through Part 3. He didn’t return to it until 1910, finally completing the whole work in November 1911. The first performance took place in Vienna in February 1913 and was met with great acclaim – something that disconcerted Schoenberg, whose recent music had been mostly rejected and jeered at.

In spite of the radical change of style that he had achieved in the intervening 10 years, Schoenberg made very few substantial changes to the music when completing the score. The main difference is in the orchestration, which becomes noticeably sparer, as if moving from Wagnerian opulence to the textures of late Mahler – although Schoenberg of course wouldn’t have known anything beyond the Eighth Symphony. But the opulent late romanticism of the earlier parts of the work had already been displaced by the considerably more advanced music that characterises, in particular, Klaus and the Speaker, all of which nevertheless dates from around 1900.

Over the years since I first discovered Gurrelieder my relationship to Schoenberg’s music has changed – from a fascination with all aspects of it to a slowly shrinking number of works that I feel close to. Many years ago I had a correspondence with Hans Keller in which I tried to suggest that Schoenberg’s radical developments in the first decade of the twentieth century went in parallel with a change of personality, which meant that the music became increasing cerebral and rather joyless. Keller of course dismissed this out of hand, ending by saying ‘Leave Schoenberg alone’. But clearly something happened that made Schoenberg lose the intense expression and warmth of his early music – technical advances alone cannot explain the dry, unlovable quality of works like the Wind Quintet.