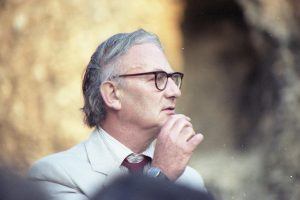 I’m very sad to learn of the death of Donald Mitchell, who I knew and worked with for more than forty years.

Donald’s unqualified admiration for the music of Benjamin Britten was the central focus of his life. He began writing about Britten in the late 1940s, and never stopped : the immense task of editing the six volumes of Letters from a Life preoccupied him for well over 30 years, although by 2012, when the final volume appeared, he was no longer able to be involved. But his major achievement was the foundation of Faber Music in 1965, specifically in order to be able to publish Britten, but also, with Britten’s encouragement, to take on the younger generation of composers. Donald was the last surviving executor of Britten’s will, becoming director of the Britten-Pears Foundation and chair of the Britten Estate : his tireless advocacy of Britten’s music meant that there was never any posthumous decline in the composer’s reputation. For someone who had had little formal musical education, his knowledge of and passion for so many areas of the musical world was remarkable. His devotion to Britten was paralleled by his obsession with Mahler, publishing four studies of the music between 1958 and 2005. If one had to find one word to characterise Donald it would be ‘enthusiasm’ : whether one agreed or not with his always eloquently expressed opinions, it was impossible not to admire the sharpness of his mind and the generosity of his spirit.